Redrafting the First Round of the 2017 NFL Draft

Imagine a world where in-draft trades were wiped out and teams were given a second chance to re-draft the 2017 rookie class with 20/20 hindsight—what a wonderful place that might be for some dejected fan bases heading into the second half of the season. While it’s an exercise grounded in fantasy, it also teaches us a little bit about over-consuming the common pre-draft narratives that seem to blanket every class. More than ever, it appears highly-talented rookies can come from anywhere at any position and have a profound effect on the season ahead. Here’s a draft that reflects as much…

(ACTUAL PICK: GARRETT) Garrett’s had poor luck with injuries in his rookie season, but he delivered four sacks in the three games he did play. Pro Football Focus’ grade would have placed him alongside the likes of Chandler Jones, Jadeveon Clowney and Carlos Dunlap for his rookie season through eight games—something Cleveland would have gladly signed up for.

(ACTUAL PICK: SOLOMON THOMAS, DE, STANFORD with No. 3 pick via trade with Chicago)Andy Benoit detailed Lattimore’s rise in Dennis Allen’s defense here, and I can’t help but wonder if Lattimore would be equally as perfect for Robert Saleh in San Francisco. Saleh loves bringing the heat and someone with Lattimore’s confidence and man cover skills would fit perfectly.

(ACTUAL PICK; MITCHELL TRUBISKY, QB, UNC with No. 2 pick via trade with San Francisco) It’s true that Watson had DeAndre Hopkins and Will Fuller in Houston, but I cannot imagine Watson not providing a similar spark in Chicago—and something to ignite them offensively and keep their eighth-ranked defense off the field is what the Bears really needed this season. Just picturing an offense with Watson, Jordan Howard and Tarik Cohen is fun, no?

(ACTUAL PICK: FOURNETTE) No need to overthink this one. Fournette has fit the Jaguars perfectly this season and bought them time to evaluate Blake Bortles for one last go around. He can negate a team’s deficiencies at quarterback and rest a defense that has become a quarterback’s worst nightmare in 2017.

(ACTUAL PICK: COREY DAVIS, WR, WESTERN MICHIGAN) Pairing Adams with Kevin Byard might have given the Titans the league’s second-best safety tandem in football next to Seattle. Kudos to the Jets for stocking up on both Adams and Marcus Maye, which solidifies the position for a few seasons to come.

(ACTUAL PICK: ADAMS) With the Sheldon Richardson trade in their (theoretical) rear-view mirror, the Jets do what they did a year ago during the Leonard Williams draft and simply take the best defensive lineman that drops into their lap.

(ACTUAL PICK: MIKE WILLIAMS, WR, CLEMSON) Ramczyk ended up being the early leader for best rookie offensive tackle in a class that was supposedly devoid of talent. Pro Football Focus ranks Ramczyk one slot behind Joe Staley, and well above any of Los Angeles’ current tackle options.

(ACTUAL PICK: CHRISTIAN MCCAFFREY, RB, STANFORD) If Carolina was apparently souring on Kelvin Benjamin this much, maybe a move to get a receiver pegged as the next Dez Bryant might help. Obviously, a slew of injuries have obscured Davis’s rookie numbers, but his strength and speed would still do well in an improvisational Panthers offense that doesn’t seem quite ready for Christian McCaffrey anyway. 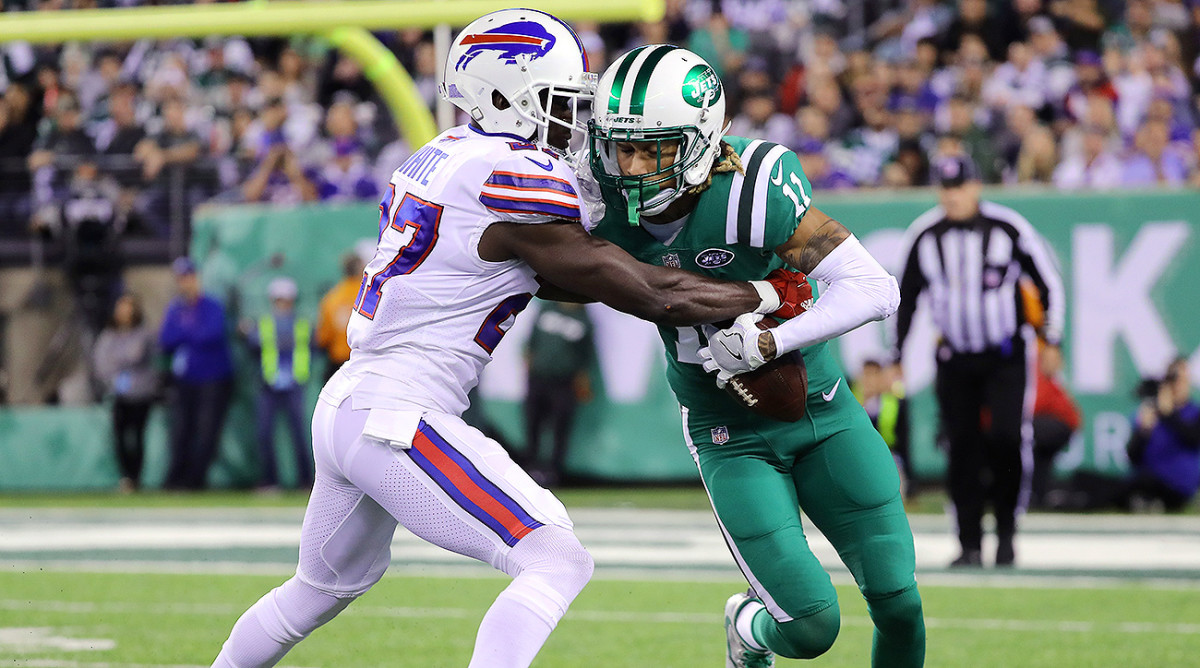 (ACTUAL PICK: JOHN ROSS, WR, WASHINGTON) White seems to be nipping at Lattimore’s heels for defensive rookie of the year consideration and would have been a wonderful addition to the uncertain defensive backfield in Cincinnati. Imagine what Marvin Lewis could do with a pair of shut down cornerbacks.

(ACTUAL PICK: WHITE with No. 27 pick via trade with Chiefs) The Bills signed Mike Tolbert in the offseason to pair with LeSean McCoy’s finesse running game, but imagine Hunt coming in every other series to spell the Pro Bowler. There was no immediate fix for the Bills’ biggest offensive needs this early in the draft, but doubling down on workhorse running backs would be a solid start.

(ACTUAL PICK: LATTIMORE) Foster is among the 49ers’ top tacklers this season and he’s only played in one full game. Last week against the Cardinals, Foster put up 13 solo tackles with a high ankle sprain. 49ers GM John Lynch said that Foster was the No. 1 player on his board heading into the draft, and had it not been for a fortuitous Bears trade, he would have taken Foster No. 3 without sweating it. Saints still help their defense here.

(ACTUAL PICK: JABRILL PEPPERS, S, MICHIGAN with the No. 25 pick via trade with Texans) The idea this offseason was a one-for-one swap, Terrelle Pryor for Kenny Britt. Then, Corey Coleman went on injured reserve and the wheels fell off Cleveland’s offense. Would it have been more enticing—or at least more hopeful—to give whoever is the Browns’ next quarterback two, versatile first-round talents to work with?

(ACTUAL PICK: HAASON REDDICK, LB, TEMPLE) I wonder what the Cardinals would have done if the rest of the NFL didn’t leapfrog them and take quarterbacks in 2017. Perhaps there wouldn’t be the same end of an era feeling like there currently is in Arizona.

(ACTUAL PICK: DEREK BARNETT, DE, TENNESSEE) While the Eagles organization prefers to draft their running backs in the later rounds, this pairing would have been too enticing to pass up.

(ACTUAL PICK: HOOKER) One of the few teams who probably would have made the same choice all over again. Hooker was the right foundational piece for this defense, no matter who will be coaching them a year from now.

(ACTUAL PICK: MARLON HUMPHREY, CB, ALABAMA) Reddick is last among all graded linebackers from PFF this year with a qualifying number of snaps, but I wonder if Baltimore’s defense would have been a more fostering environment right off the bat.