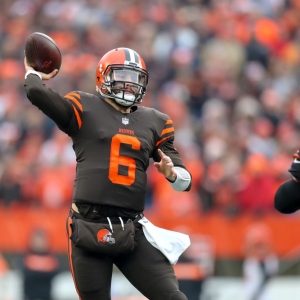 I’m sure you had used the San Francisco 49ers already this season in your Survivor Pool, but if you took them in Week 11 at home vs. the Arizona Cardinals, boy were you sweating down 16-0 in the second quarter. And if you took Arizona at +9.5 points from a betting perspective, boy did you get hosed. Maybe even worse if you had 49ers -10.

The 49ers were outplayed much of the game but took a 30-26 lead on a Jimmy Garoppolo 25-yard touchdown pass to Jeff Wilson Jr. with around 30 seconds left. OK, the Niners are going to win here but surely Cardinals bettors were feeling pretty good. Naturally, though, the Cardinals tried a bunch of laterals on the final play of the game and it was recovered by the Niners and returned for a touchdown. Final score: 36-26 – when teams score on the final play and the result isn’t in question, said team doesn’t have to try the extra point. That’s something the NFL is going to have to consider changing now that gambling is legal in this country; it used to be that teams did have to at least take the field and could just take a knee or whatever.

The 49ers became the first team to win by 10 points after trailing by three with under a minute to go since Dec. 13, 2004. I know you don’t care about my fantasy football team, but I won my crucial matchup with playoff implications only because of that defensive touchdown. That’s why we love the NFL.

My top Survivor pick last week was also sweat-worthy as the Minnesota Vikings somehow found themselves down 20-0 at home at halftime to a bad Denver Broncos team, only to rally for a 27-23 victory. NFL teams had won 97 straight games when leading by 20 or more points at halftime. The Vikes had been 0-8 in that scenario under coach Mike Zimmer. It was also Kirk Cousins’ first win with the Vikings after trailing in the fourth quarter (he was previously 0-10-1).

So while there were some close calls for big favorites, really the only Week 11 upset was Atlanta winning at Carolina.

Here’s a look at Week 12, with four teams on the bye (last of the bye weeks): Kansas City, LA Chargers, Minnesota and Arizona. The team listed first is the choice.

14. Cleveland vs. Miami: Obviously tough to trust Cleveland with how inconsistent that team is and now without superstar defensive end Myles Garrett for the season after he tomahawked Steelers QB Mason Rudolph with his own helmet in last Thursday’s win. The Fins are playing much better the past few weeks, but no way the Browns choke here after saving their season temporarily with the win over Pittsburgh. Browns also on extra rest and it will be a bit chilly in Cleveland, and Miami rarely plays well when it’s below 50 degrees.

13. New Orleans vs. Carolina: Kyle Allen finally remembered he was Kyle Allen in last week’s loss to Atlanta by throwing four picks. Maybe all those Panthers fans shouldn’t force Cam Newton out of Charlotte quite yet (although I’m hoping the Bears can get him this offseason).

12. Atlanta vs. Tampa Bay: What has gotten into the Fighting Dan Quinns? Back-to-back upsets for the NFL’s most embattled coach. Meanwhile, four more interceptions for Jameis Winston in last week’s loss to the Saints. He needs a fresh start somewhere else.

11. Tennessee vs. Jacksonville: The Jaguars finally got interesting when they were surrounded by Minshew Mania but stupidly went back to Nick Foles last week and got trucked by the Colts. That’s why the Jaguars suck as an organization. Move to London already.

10. Pittsburgh at Cincinnati: Look, the Bengals more than likely are going to avoid 0-16 and probably get at least one home victory. This sets up as a major trap game for the Steelers after that emotional loss in Cleveland. Pittsburgh also could be sans James Conner and Juju Smith-Schuster. I would NOT use Pittsburgh as your to pick this week is my point.

9. Buffalo vs. Denver: Don’t trust that Bills offense at all but Buffalo’s defense probably will hold the Broncos to single digits in a game that will end in a baseball score.

8. Houston vs. Indianapolis (Thursday): Colts quarterback Jacoby Brissett has never lost to Houston in four career starts, but after laying a huge egg last week in Baltimore, I fully expect Deshaun Watson to have a huge game . Plus, Indy is without top running back Marlon Mack and perhaps top WR T.Y. Hilton again due to injury.

7. Chicago vs. NY Giants: I’m out of words for how spectacularly shi***y the Chicago offense has been this season. Don’t know if Mitchell Trubisky will even play this week nor do I care. The Giants stink worse, though. Bears barely.

6. New England vs. Dallas: I can’t tell you how happy Fox TV executives would be as well as every sportsbook on the planet if this is the Super Bowl matchup in February because it would break all sorts of records between the league’s two most popular teams. Cowboys certainly can win this one, but Patriots just don’t lose November games at home.

5. Washington vs. Detroit: The Lions usually aren’t a good cold-weather outdoor team this late in the season and that was with Mathew Stafford. Remains to be seen if he returns from his back injury – really what’s the point now? – or if it’s Jeff Driskel again. Skins get their first (and probably only) home win of 2019.

4. Philadelphia vs. Seattle: Seahawks got jobbed a bit when this was shifted out of the prime-time window to a 10 a.m. Pacific time start, but they do at least come out of their bye. The Eagles need this one much more and win close.

3. NY Jets vs. Oakland: It’s now official — thanks to Josh Jacobs and owning the Bears’ 2020 first-round pick, the Raiders have won the Khalil Mack trade. Sigh. But this screams trap game with a trip across country. Jets/Sam Darnold have looked much better the past two weeks.

2. Green Bay at San Francisco: This was flexed into the Sunday night window. I’ll take Aaron Rodgers in essentially a homecoming game over Jimmy Garoppolo.

1. LA Rams vs. Baltimore (Monday): Ravens are due a bit of a clunker and the Rams will load up the box to make Lamar Jackson beat them with his arm. The MVP favorite won’t.

Want free NFL picks? Doc’s has you covered. New clients can take advantage of this great offer of $60 in free Doc’s Sports members’ picks for any handicapper on Doc’s Expert Handicapper list. Just check out these guys’ pages and see what great work they have done making money for themselves and their clients over the years. Get $60 worth of premium members’ picks free . Get free NFL picks weekly on Doc’s Sports free football picks page.